Home » Khodorkovskiy in a cage

Khodorkovskiy in a cage

In the case of Khodorkovskiy v. Russia the Court reaffirmed that placing a person in a cage during a trial if the person is not predisposed to violence or there are no serious security threats, is degrading and violates Article 3.

The Court noted that the practice of placing a criminal defendant in a sort of a “special compartment” in a court room existed and probably continues to exist in several European countries (Armenia, Moldova, Finland). In some countries (such as Spain, Italy, France or Germany) the accused are sometimes placed in a glass cage during the hearing. Such a practice has occasionally been examined in the context of the guarantee of the presumption of innocence under Article 6 § 2 of the Convention (see Auguste v. France, Meerbrey v. Germany). In recent years the Court has begun to examine the practice also from the standpoint of Article 3 of the Convention. Thus, in the case of Sarban v. Moldova the applicant was brought to court in handcuffs and held in a cage during the hearings, even though he was under guard and was wearing a surgical collar. A violation of Article 3 of the Convention was found in a case where the applicant was unjustifiably handcuffed during public hearings (see Gorodnichev v. Russia). Handcuffing of the applicant gave rise to a violation of Article 3 of the Convention also in a situation where no serious risks to security could be proved to exist (see Henaf v. France, Istratii and Others v. Moldova).

I was wondering whether the experience of a person when put in the cage is of such a degrading nature to be considered under Article 3?

The Court used the words of the Applicant to describe it: “… the applicant’s trial was covered by almost all major national and international mass media, so the applicant was permanently exposed to the public at large in such a setting. … the Court concludes that such a harsh appearance of judicial proceedings could lead an average observer to believe that an extremely dangerous criminal was on trial. Furthermore, [the Court] agrees with the applicant that such a form of public exposure humiliated him in his own eyes, if not in those of the public, and aroused in him feelings of inferiority” (paragraph 125).

I could see that this experience is not pleasant and that the state should not act like that, but I was not convinced that this feeling of inferiority and humiliation in his own eyes or those of the public is or could be severe enough in general. Some of my colleagues were very supportive of the Court’s approach to this issue when we discussed the case at a meeting. And I join them now in their views when I have seen a picture[1]: 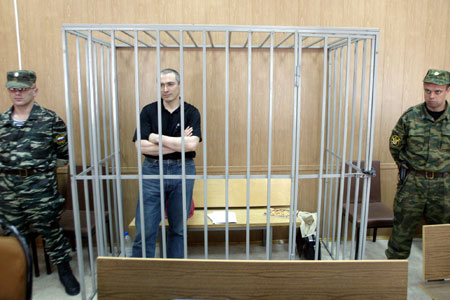 [1] The copyrights holder of the picture is unknown.

Join 4,214 other subscribers
We use cookies on our website to give you the most relevant experience by remembering your preferences and repeat visits. You may visit "Cookie Settings" to provide a controlled consent.
OptionsAccept All
Manage consent