Home » A Poll on Palomo Sánchez

A Poll on Palomo Sánchez

We are pleased to be organising our first poll to ask our readers about their opinion!

The poll concerns the recent judgment of Palomo Sánchez v. Spain in which the Grand Chamber of the Court ruled that the Spanish courts had not failed their positive obligation to protect the freedom of expression of four employees who were dismissed by their employer for having insulted two of their co-workers and a member of management. The employees, who were also executive members of a trade union they had set up, were dismissed after they had published two articles and a cartoon in the union newsletter, severely criticising management and specifically denouncing two of their co-workers for having testified in favour of the company in proceedings the applicants had brought against it in the context of a social dispute. In its judgment the Grand Chamber held in particular that, due to their offensive and insulting character, the cartoon and articles overstepped the bounds of acceptable criticism of private individuals under article 10 ECHR. The Court held that the sanction of dismissal was not disproportionate and that article 10, read in the light of article 11, had not been violated.

Considering the crucial importance of Palomo Sánchez for trade union freedom of expression we are curious about the opinion of our readers on one particularly controversial aspect of the case and the judgment: the cartoon and its assessment by the Court.

Participate in our poll and find out what the other voters thought of it! Should you wish to clarify your response, do not hesitate to use the comment section below the post. 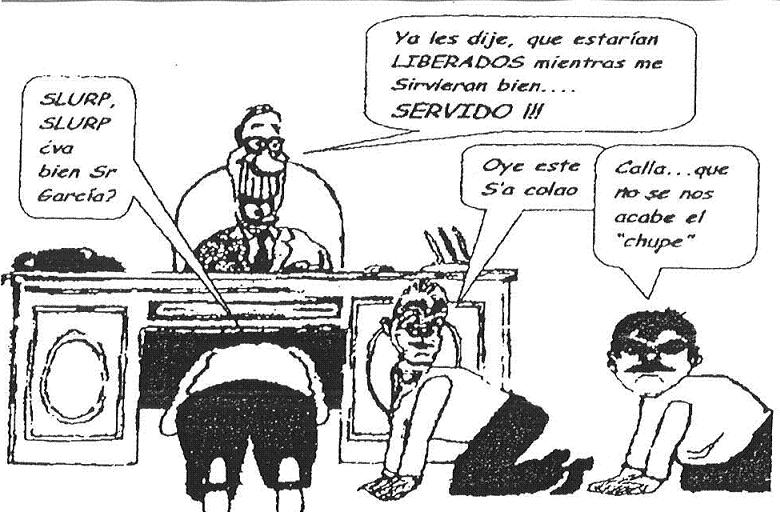 Translation from left to right (by Spanish native speaker): “Slurp, slurp, is everything going well, Mr. Garcia?”; “I already told you that you were FREED as long as you kept me well-served … SERVED!”; “Listen, this one has jumped the queue!”; “Shut up … or the “sucking” up will otherwise be over for us”.

Rabczewska v. Poland and blasphemy before the ECtHR: A neverending story of inconsistency

Blasphemy and Choudhury v. the United Kingdom revisited in light of the attack on Rushdie

Join 4,181 other subscribers
We use cookies on our website to give you the most relevant experience by remembering your preferences and repeat visits. You may visit "Cookie Settings" to provide a controlled consent.
OptionsAccept All
Manage consent